One year ends and a new one begins, which gets us in the mood to consider how EssentialPIM has changed in the last twelve months and what is ahead.

Let's review some major changes in 2022 and see what may be in the plans.

Besides updates to appearances, EPIM made certain tasks more efficient. You can:

Converting items from one type to another also became easier.

In Notes, you can convert a leaf to a new note by right-clicking on the tab and choosing Convert to Note in the context menu (Figure 7). EPIM will move the leaf under the Root. To control where the leaf goes in the hierarchy, pick the copy or cut options from the context menu, select the note where you want it inserted, and paste.

When you convert an email, contact, task, or appointment to a note, EPIM will open the note in a new window for editing and automatically make its title a link to the original item. 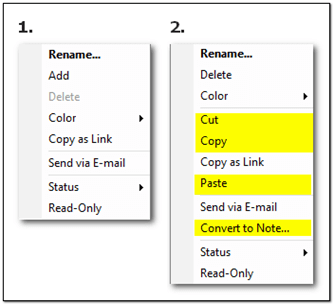 Figure 7. Expanded context menu options for copying a leaf or converting it to a Note.

While we're looking back, the EPIM team has implemented several requests from users in recent releases, including:

The android version of EssentialPIM reached two milestones in 2022. AEPIM celebrated its 10th anniversary, having been released in July 2012. The second milestone is the synchronization of AEPIM with EPIM Cloud, introduced in version 6.0. With EPIM Cloud as the bridge, you can now sync your data across Windows and Android devices. You can read more about this here.

Features that are planned

Between the vision of the EssentialPIM team and requests from users, we can expect EPIM to continue advancing in 2023. Forthcoming features that have been mentioned in the Forum include:

Best wishes for a healthy and safe 2023.